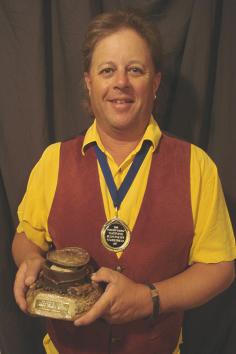 Graeme Johnson is a Poet who writes and performs both traditional and original verse following in the footsteps of Australia's rich heritage of rhyme and meter.

Known as "The Rhymer from Ryde", Graeme hails from country NSW and has lived in inner city Sydney since 1991.

After meeting some colourful characters called "Bush Poets" in 1994, Graeme was inspired to combine his love of language with 25 years of theatrical experience to take his poetry "back to the people".

Often described as "painting pictures with words", Graeme uses his skills to draw his audience into his stories about our Great Southern Land and its people.

Whether it is his recollections of travels in the countryside, his love of our colonial history, or reliving the experiences of the bohemian residents of Sydney's past, Graeme is drawn with fierce patriotism to embrace the virtues that makes us the "Aussies" that we are today.

Since dedicating himself to a life of poverty (being a folk artist) some 12 years ago, Graeme's bookings have taken him right around the Country. Also a popular Master of Ceremonies, Graeme's achievements in the genre have seen him accredited by the Australian Bush Poet's Association as a certified judge for both written and spoken poetry competitions held Australia wide.

In the last 12 years Graeme has received over 150 awards for his written & spoken Bush Poetry, Free verse, Limericks & Yarnspinning.

He is published both in magazine and book form, has appeared in numerous Anthologies of Australian poetry and appears regularly on radio.

He has produced two books of original verse, one cassette and five CD's including his current release, the 2 CD Boxed Set "Home Brew" (See SHOP page for order details).